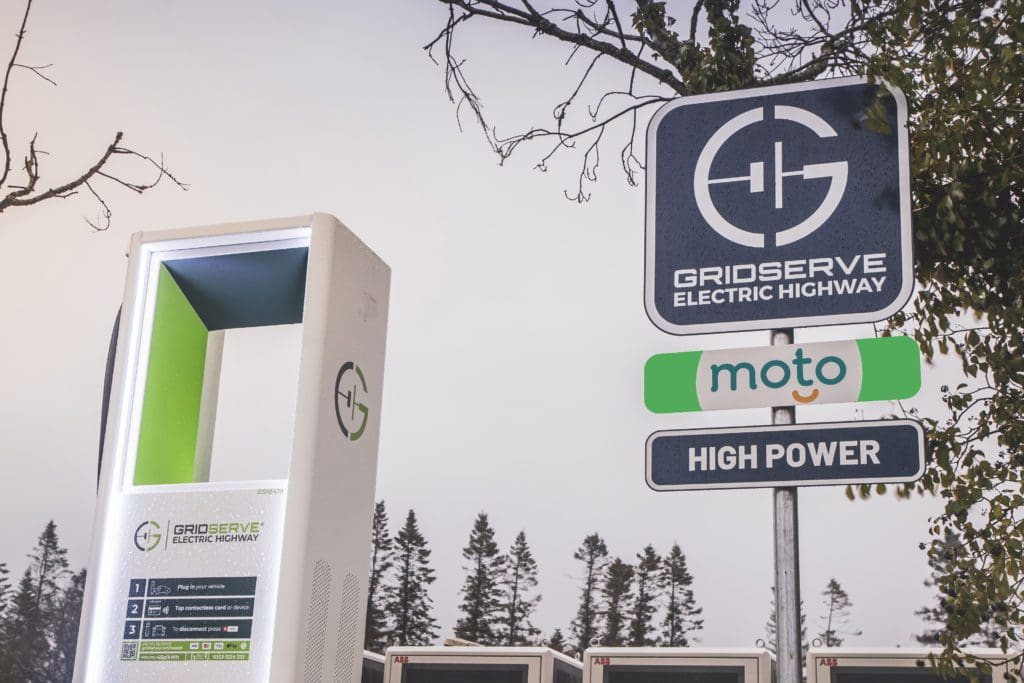 Wales’ first high-powered electric vehicle (EV) charging hub has opened at Moto Swansea, marking a step-change in the country’s EV charging infrastructure and supporting drivers to switch to EVs ahead of the 2030 ban on new petrol and diesel vehicles.

The advanced Electric Hub, part of the GRIDSERVE Electric Highway – one of the UK’s leading EV charging networks – initially hosts six 350kW high-power EV charge points, with the ability to quickly add a further six high-power chargers as soon as they are required. All chargers will be supplied with 100% net zero carbon energy from GRIDSERVE’s solar farms, accept contactless payment for maximum accessibility, and have the ability to deliver 100-miles of range in less than 10 minutes.

Located at junction 47 on the M4 at Moto Swansea, the GRIDSERVE Electric Hub supports the Welsh Government’s plans to slash emissions from transport, a sector responsible for 17% of the country’s overall emissions. The Government’s Electric Vehicle Charging Strategy for Walesi commits to delivering 4,000 rapid chargers across the country over the next decade – of which just 3% are already installed.

Lack of public charging infrastructure is a known barrier to EV adoption and has historically led to regional disparities in EV registrations. Currently, Wales has one of the lowest numbers of EV charge points per head of population in the UKii and Southwest Wales – where GRIDSERVE’s Electric Hub is located – has just half the average proportion of EVs when compared to the rest of the UK.iii

GRIDSERVE is actively looking at further sites in Wales for the development of future Electric Hubs and award-winning Electric Forecourts® to help boost charging in the country and give people the confidence to make the switch to electric vehicles.

Toddington Harper, CEO of GRIDSERVE, said:
“Our mission is to accelerate the transition to electric vehicles in the shortest possible timeframes to help prevent the worst impacts of climate change. This is a landmark project for GRIDSERVE and Moto and the first high-power charging facility of its kind for Wales. We’re really excited to be demonstrating that all parts of the UK should be able to embrace the EV revolution. We cannot let a lack of infrastructure prevent drivers from realising the myriad of benefits that come with driving an electric vehicle. This project will help deliver the confidence for more people to make the switch to EVs, as well as support the growing number of people who already have.”

He continued: “Thanks to partners like Moto, we are rapidly upgrading Britain’s motorway charging network and are prioritising areas of the UK that currently lack adequate charging infrastructure, by deploying more high-power Electric Hubs and Electric Forecourts®. The Electric Hub at Moto Swansea is the first of many projects that we are aiming to deliver across Wales.”

Ken McMeikan, CEO of Moto, added: “At Moto, we are absolutely passionate about transforming the electric vehicle charging experience for drivers across the UK’s motorways by delivering the capacity, reliability, simplicity and charging speed UK motorists need.“

“We are accelerating our ambition to open Ultra Rapid Charging Hubs at all of our Motorway Service Areas over the coming 12 months and are delighted with the progress that our partnership with GRIDSERVE is making. We launched our first EV Hub with 24 Ultra Rapid chargers at Moto Rugby last year and EV drivers have loved it, we are super confident we’ll see the same level of success here at Moto Swansea.”

Mike Hedges, MS for Swansea East said: “By 2025, Swansea is predicted to have one of the highest demands for EV charging in Wales as the uptake of electric vehicles continues to accelerate. Ensuring that we have the infrastructure in place now is fundamental to enabling more drivers to make this transition sooner. GRIDSERVE’s high power Electric Hub in Swansea is a step-change for rapid charging infrastructure in Wales and will support local drivers and visitors with the charging solutions they need.”

GRIDSERVE is delivering the biggest upgrade to motorway EV charging infrastructure in UK history. Over 20 Electric Hubs – each consisting of 6-12 x 350kW ultra high-power chargers – are due to open at motorway services across the UK by the end of Q2 2022, with large numbers of additional Electric Hub sites being lined up to follow. Since GRIDSERVE’s acquisition of Ecotricity’s Electric Highway in June of last year, the company has already invested tens of millions of pounds in upgrading the network. In addition to opening the first Electric Hub at Moto Rugby, the company has replaced more than 300 historical Ecotricity DC rapid chargers and has installed 130 additional AC chargers, ensuring that the charging needs for all types of electric vehicles are catered for.

In addition to the extensive upgrades taking place across the UK’s motorway network, GRIDSERVE is also progressing plans to deliver more than 100 Electric Forecourts® across the UK, with sites at Gatwick Airport and Norwich already in construction, with many more sites in development. GRIDSERVE opened the UK’s first Electric Forecourt® close to Braintree, Essex in December 2020.