Pre-conditioning technology, available on electric cars to heat the cabin in advance, could save you an estimated 15 hours of defrosting each morning during the winter.

UK drivers spend an estimated 15 minutes before the morning commute de-icing their car, and with 62 working days between the start of December and the end of February, that’s almost 1,000 minutes – or 15 hours – spent in the cold and dark scraping and brushing snow.

Meanwhile, electric car drivers who make use of cabin pre-conditioning are tucked up in bed, or enjoying a cup of coffee scrolling on their Insta feed.

So how does cabin pre-conditioning work?

Pre-conditioning allows you to schedule your departure time in advance and select the temperature you want the cabin to be when you get in. It’s relatively simple to set up and is often controlled via an app downloaded on your smartphone or set up through the in-car infotainment system.

Ahead of you leaving the house, it’ll bring the cabin up to temperature, defrost and demist your windows and warm your battery so it’s operating at its peak. This also helps maximise your range if you’re pre-conditioning while plugged in at home. If you get into a cold car, you have to use the battery to warm the car up on the go, which’ll reduce your overall mileage.

Pre-conditioning also stops you making some of the common (and expensive) mistakes that UK drivers do each year to defrost their car in a hurry: for example, boiling water from the kettle which can crack your glass or using wiper blades to clear the windscreen only to wear out the electronics because they’re frozen stiff. It’s also not great for your neighbour’s health, or the planet, if you’ve got the engine idling for 15 minutes.

How pre-conditioning can help avoid a winter driving fine

Better still, pre-conditioning can prevent you falling foul of the law. Often drivers don’t want to wait for the whole car to defrost so will set off with just a small portion of the window clear – this is known as ‘portholing’.

‘Portholing’ carries an on-the-spot £60 fine and three points on your licence, and that includes if your screen is fogged up. And if you have an accident because your vision is obscured and you’ve failed to clear it properly, then you’ll face more serious punishment.

With that in mind, it really is worth doing it properly. De-icer spray and a plastic scraper or brush are your best bets if you’re not lucky enough to enjoy the pre-conditioning lifestyle.

For more of the best hacks on driving in the winter with an electric car, check out our complete guide here. 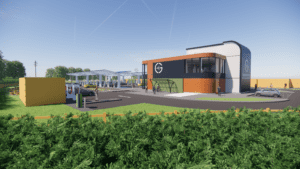